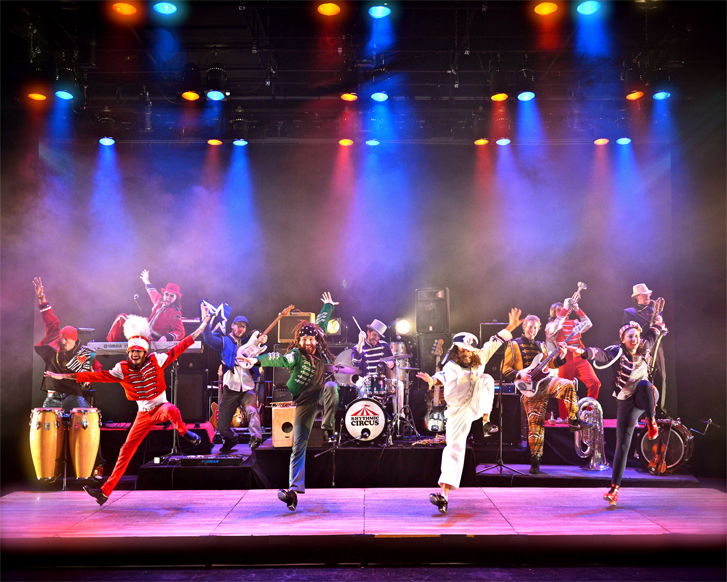 Home grown hoofers from Minneapolis are coming to the Numerica Performing Arts Center on April 18 at 7:30pm. With a trunk full of tap shoes, funky costumes, and a big brass band, get ready for Rhythmic Circus. ’ FEET DON’T FAIL ME NOW!, an upbeat parade of genre-hopping music and hard-hitting percussive dance joined by “human beatbox” Heatbox. This performance was made possible by Dennis & Sharron Johnson, Frank Kuntz, Grace Lynch, and Earl & Barbara Tilly.

Since the founding of the troupe in 2007, Rhythmic Circus has grown into an international sensation touring over 100 cities worldwide. Feet Don’t Fail Me Now! premiered in August 2008 when the group’s dancers and founders joined forces with the seven Twin Cities’ heavyweight musicians in Minnesota. Together, they combined rapid-fire tap with a variety of musical genres. In 2012 the troupe was the winner of the Edinburgh Festival “Spirit of the Fringe” Award."We created Feet Don't Fail Me Now! out of the desire to get people back in touch with the spirit of celebration. The show helps remind our audiences that there is always a reason to get up, let go and dance," said Rhythmic Circus’ co-creator Nick Bowman. "The name of our show comes from an old New Orleans chant dating back to the early 1900's- a time when the city was rich with culture and spirit; they literally had parades every Sunday just to celebrate their lives and community. Rhythmic Circus has adopted the chant as more of a rallying cry. We have been ecstatic to see it strike a chord with people everywhere from our home town to Off-Broadway and all the way across the globe."The company's repute goes beyond the sum of the dancers' talents; themed pieces include costume changes and musical segues that highlight the funky styling of a seven-piece band. With their combined and highly integrated talents, the dancers and musicians are known for leaving audiences on their feet and dancing.Tickets to Feet Don’t Fail Me Now! are $25-$29 with discounts for seniors ($21-$25) and youth ($19-$23) and increased prices on show day. This show is supported by The Freytag Group and Susan & Rick Rose. For tickets and information, call 509-663-ARTS, go to www.numericapac.org, or visit the Box Office at the Stanley Civic Center, 123 N Wenatchee Avenue.The Numerica Performing Arts Center at the Stanley Civic Center is a non-profit organization and naming partner with Numerica Credit Union.

Filed under
Enrich
Tourism
Back to Blog