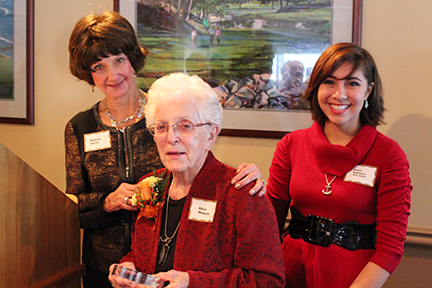 The WVC Foundation honored long-time East Wenatchee resident Edna Maguire for her financial support during the third bi-annual WVC Foundation’s Barbara Wilson Women’s Luncheon on Thursday, Nov. 14.In 1995, Jack and Edna Maguire established a scholarship endowment with the WVC Foundation with a gift of 7,000 shares of Washington Mutual Bank stock. At the signing of the endowment documents, the Maguires said they wanted to give something back to the community, and they particularly wanted to focus on education. Their scholarship provides financial assistance to graduates of Chelan, Douglas and Okanogan counties who pursue degrees in education. The scholarship provides full tuition, books and fees for an academic year.Due to Jack and Edna’s philanthropy, the scholarship fund has been awarded more than 80 times since its inception, paying out more than $187,000.Jack Maguire was a stockbroker who lived in Wenatchee since 1947 and was responsible for the opening of the Wenatchee branch of Murphy Favre in 1952. Jack passed away in 1998, but Edna continues to support WVC students and enjoys meeting them in person each year.Stacey Lockhart, executive director of the WVC Foundation said, “Jack and Edna’s support has been truly transformational, changing the lives of the WVC students who have benefited from their generosity. It is only fitting that we recognize Edna for her ongoing impact and financial support of WVC students.”Tracy Ross, a former recipient of the Jack and Edna Maguire Scholarship, is in her seventh year as a special education teacher at Eastmont High School. “If it were not for the Jack and Edna Maguire Scholarship I received at Wenatchee Valley College, I would not be living my dream today,” Ross said.Delia Villanueva, also a former recipient of the scholarship, began attending WVC in 2002 as a Running Start student. “I will always remember my mother’s joyful, teary eyes when she saw me dressed in my cap and gown preparing to walk during graduation,” Villanueva said. “I was so proud of myself for accomplishing something that seemed impossible and even happier to make my mother proud.”Her mother motivated her to take advantage of all the opportunities that she, a mother and the head of a single-parent household, had never had the opportunity to pursue herself.“As I take a moment to reflect back on my accomplishments and all those pieces that came together to help me succeed in life, I want to acknowledge the Jack and Edna Maguire Education Scholarship,” Villanueva said. “This scholarship was a little piece of my success. It was the springboard to my educational accomplishments at Washington State University and future success as a person and as an educator.”

Filed under
Business
Enrich
Back to Blog