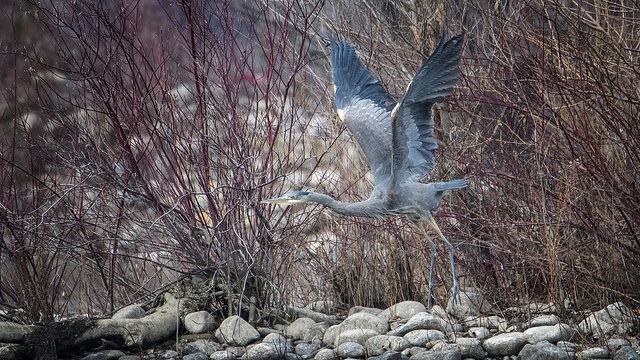 Who are these people, bundled in parkas, trudging along the Columbia River in Wenatchee in 28 degree winter weather, toting cameras, spotting scopes, and guidebooks?They’re birders, of course. They start at Walla Walla Point Park and walk northerly through the Horan Natural Area at the confluence of the Wenatchee and Columbia Rivers, searching the river banks for blue-winged teal. They see the line-up of Great Blue Herons hunching their shoulders against the cold, looking like a bunch of homeless men in old wool coats. Widgeons peep their calls from a pond off the main course of the river, keeping company with Goldeneyes and Scoters. Besides seeing birds, watchers can see stumps left by beaver that have chomped through cottonwood trees, felling them into the river.When I first moved to Wenatchee 10 years ago, my late father-in-law, who was a birder through most of his 90 years, advised me to get a copy of the National Audubon Society’s list of birds that could be seen around Wenatchee. I did. The list was over 420 species long, because Wenatchee sits in a flyway for migratory birds, and also is home to birds from various habitats: waterways, foothills, mountains, and shrub-steppes. My own list of those I’ve spotted locally is close to 150 species. You can get a list here.When I was new to Wenatchee, a friend showed off the 4-wheel drive pickup truck he and his wife had purchased, powerful enough to get them into remote areas, capacious enough for them to camp in, and explained: “We’re birders.” Even though he could get to remote birding places, he named the confluence of the Wenatchee and Columbia Rivers as one of the best birding sites he knew of.Several local birders are noted for sharing their special expertise. Naturalist Susan Ballinger and birder Jennie Graevell teach their bird ID classes through the Wenatchee Valley College. Mark Johnston with the North Central Washington chapter of the Audubon Society teaches “birding by ear,” and is the advisor to the “Larkwire,” an online system for learning to for identifying birds by ear.Audubon Washington, the state affiliate of the National Audubon Society, recognizes the Wenatchee area as a prime birding locale. Its first “Great Washington State Birding Trail” map, called “The Cascade Loop,” covers Wenatchee. See the map online and find Wenatchee at the lower right of the birding trail map. You will see additional birding trails, including the Coulee Corridor and the Sun and Sage Loop, both close neighbors to the Wenatchee area. The maps are for sale for $4.95 each or $9.99 for all seven.As productive as it remains, the Horan Natural Area at the Confluence is not the birding site it once was, because with the diversion of irrigation water and storm water run-off, much of its former wetland habitat has dried up. Even so, Dr. Dan Stephens, the ornithologist who visited it for the annual Christmas bird count of the National Audubon Society (on New Year’sEve in 2017) counted 55 different species there in a single day. And plans are underway to bring water back to the Horan.guest submission by Susan Rae Sampson, photo: Frank Cone (the one and only)

Filed under
Living Wenatchee
Back to Blog