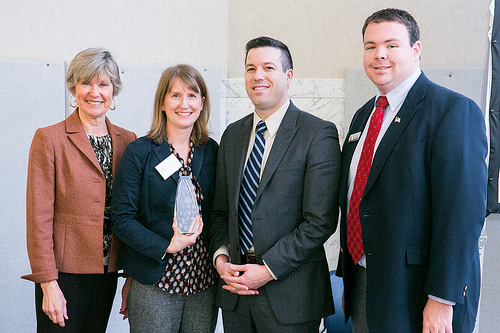 Malia Renner-Singer, a civics education teacher at Wenatchee High School, was awarded the Washington State Civic Educator of the Year award today in Olympia. She was surrounded by her family at the event held in the Capitol.“It is such a huge honor to receive this award,” said Renner-Singer. “It recognizes not only my work, but the support behind me from the administration at my school and the district, as well as the financial support of the Community Foundation of North Central Washington.”Rep. Brad Hawkins<http://www.representativebradhawkins.com>, R-East Wenatchee, nominated Mrs. Renner-Singer for the award after she coordinated a program for high school seniors known as Project Citizen. Hawkins participated as an evaluator and said he was impressed with the work Renner-Singer put into the program.“Malia Renner-Singer has gone above and beyond to ensure that her students truly experience public policy in a meaningful way,” Hawkins said in his nomination form. “Organizing the culminating event where students presented their semester projects required a great deal of effort, which demonstrated to her students how much she values their learning and civic education. She also helped raise awareness of this project through local media, which required even more personal time beyond coordination of the event itself. As a continuation of this effort, Mrs. Renner-Singer helped coordinate student testimony this session on a bill related to the students’ policy interests. She is a shining example of an outstanding civic educator in our public school system and is most deserving of this award.”“Project Citizen” promotes responsible participation in government by students and teaches them how to monitor and influence public policy.Students from Renner-Singer’s class traveled to Olympia last month<http://houserepublicans.wa.gov/news/hawkins-feb0614-enewsletter/> to testify in the House Capital Budget Committee<http://www.leg.wa.gov/house/committees/CB> in favor of legislation similar to their own project at school dealing with student nutrition.“Project Citizen allows students to practice being in a democracy by collaborating in a group on solutions to policy problems,” Renner-Singer said. “This legacy of civic education at Wenatchee High School began with Jim Bailey and Scott Benner. I appreciate everyone’s support so my students can take part in policy discussions that affect them and get them involved in their government for the rest of their lives.”Renner-Singer teaches U.S. History, Civic Citizen and AVID at Wenatchee High School.