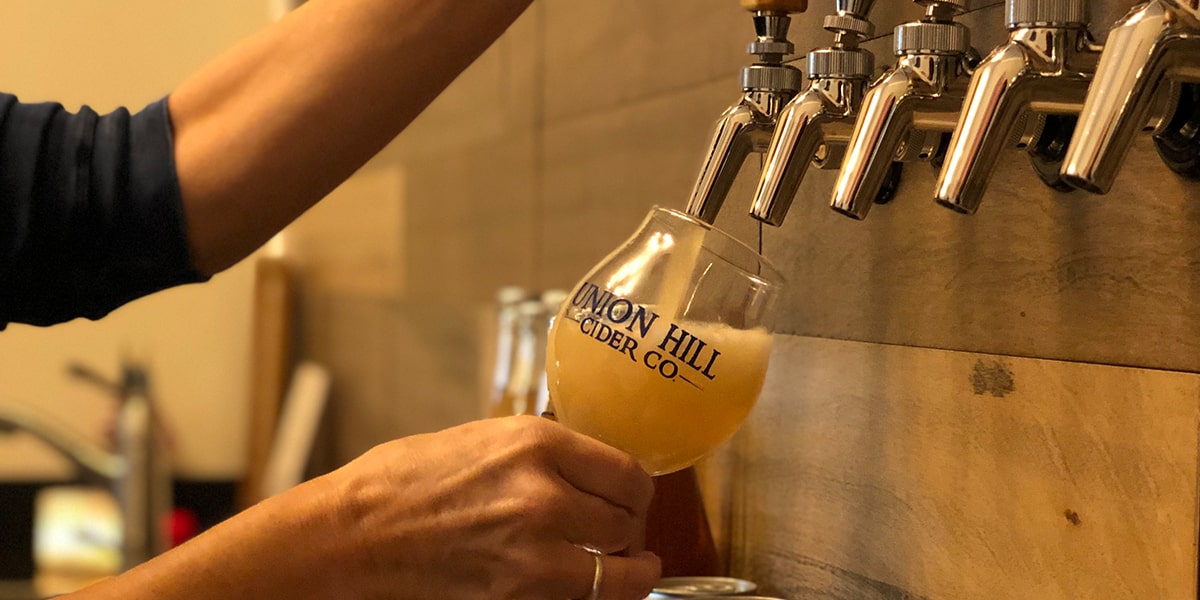 Did you know pre-prohibition, wild apple trees were rampant in the U.S. and used to make cider? Now about 100 years later, Union Hill Cider Co. is bringing old varietal trees from England and France to Wenatchee, with the goal of keeping Wenatchee’s apple heritage alive through cider.

Union Hill has been a successful apple orchard since the 1960’s, but in 2012, took a stab at cidermaking. With generations of orchardists in his family, owner Andrew Handley began to toy around with the idea of creating cider with two of his childhood friends, Matthew and David Dobbins. What started as a closet apple juice fermentation project eventually turned into award-winning cider. Now, the family owned and operated business sells its cider in taprooms and stores across Washington State including their own taproom at the orchards in East Wenatchee.

“We want to bring the Wenatchee community an awareness of cider and the styles of apples that grow here; that are unique to our valley,” says Andrew. The Union Hill taproom opened in October of 2020 after facing delays due to the pandemic. Originally, they planned on closing their doors for the winter but Union Hill saw a desire for community, connection and good cider. They stayed open and have since introduced live music and other events.

“We take pride in doing what other cideries aren’t -- we’ve been experimenting with barrel-aging some of our new blends in old red wine barrels,” says Andrew. The process gives the cider some of the same notes in the wine adding unique, exciting flavors. Andrew and the team have also been experimenting with “wet hopping”, a process where hops are boiled in with the cider.

This summer, Union Hill introduced a hop cider called Cascade. As avid hikers, the cider is an ode to the Pacific Northwest with summery, earthy flavors. Some of their other flagship ciders include Pink Heart, Hopped & Hazy and Hard Harvest.

The family roots run deep at Union Hill Cider Co. The team consists of four families all contributing to the company in various ways, whether through cidermaking or driving cider out to taprooms across the state. Andrew and his wife Katja say they take pride in being hands on through every process at the cidery. In the taproom at Union Hill hangs a sign that says “A union of family, friends and cider.”

You can visit the Union Hill Cider Co. taproom at 988 S Union Ave, East Wenatchee, or find it downtown at McGlinn’s Public House or on rotation at multiple breweries. Learn more about Union Hill Cider Co., order online or check out where to find cider here: https://www.unionhillciderco.com.

Filed under
Explore
Business
Back to Blog