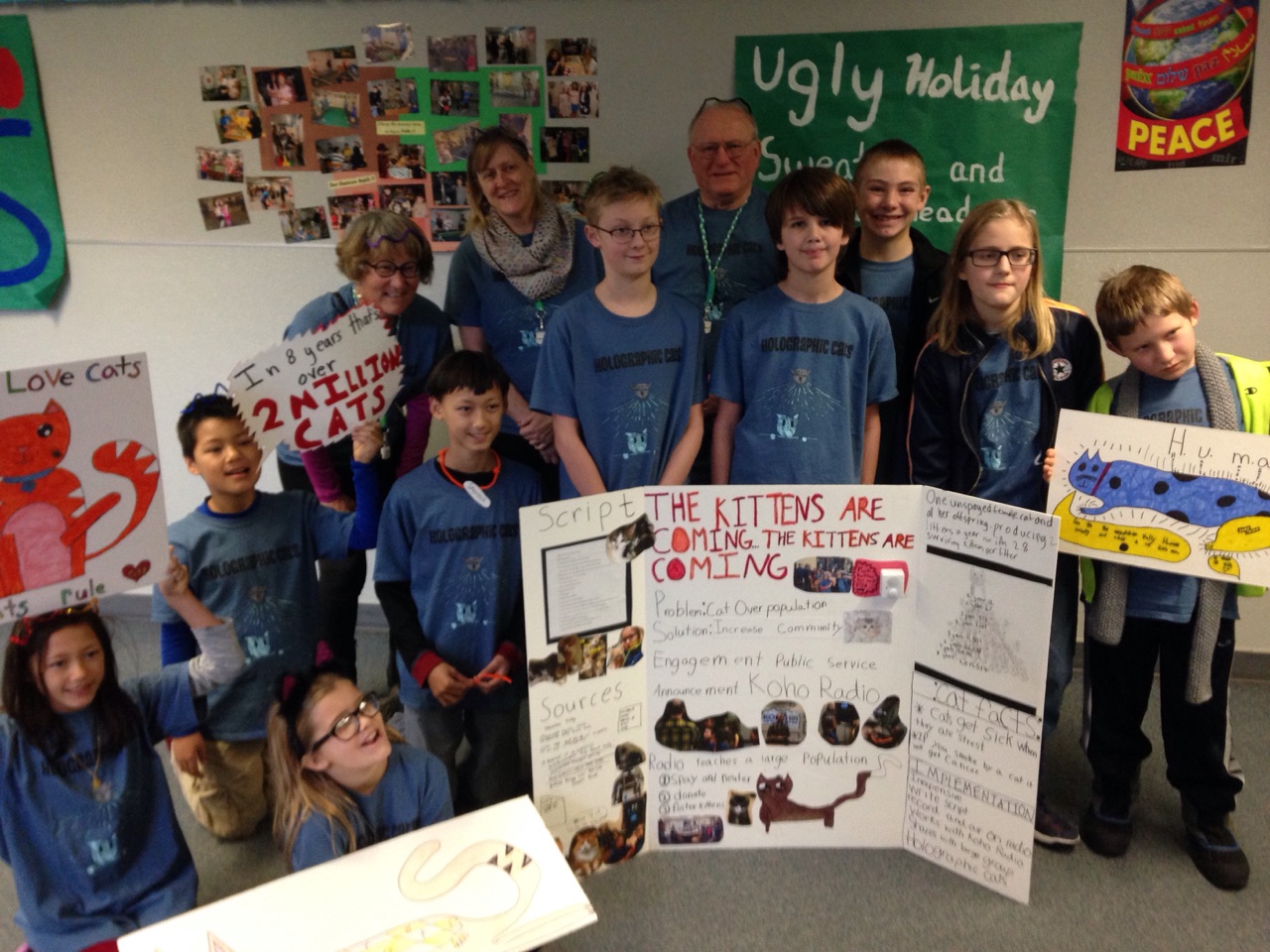 Wenatchee, WA – The Wenatchee Valley Museum & Cultural Center’s Holographic Cats FIRST Robotics Team came home on Saturday, December 10th, with hardware and the chance to compete again. The team of first-year competitors won a “Strategy and Innovation” award for their coding and earned enough points to compete in the Eastern Washington State Championship on January 21st in Spokane.The team formed in February and includes nine students ages nine to 12 from five different schools, along with three mentors. “We’re among the younger teams in the competition,” team mentor Karen Rutherford said. Team members are Nathan Carmack, Colby Musser, Matt Drolet, Alek Tracy, Helen Tracy, Shoresh McMillin, Habaya McMillin, Azriel McMillin, and Jim Koepke.According to mentor Bob Straub, coming home with a trophy and plans for continued competition were not on their radar when they left for the competition in Tri-Cities. “We were just hoping for a positive first experience that we could build on for future competitions.”Participants use real-life engineering skills to create a robot and plan for competition. But FIRST Robotics Competitions are more than just battling. They bill themselves as the “ultimate sport for the mind.” Participants must develop leadership skills, the ability to work together and decide on their core values. Among the FIRST values are gracious professionalism, a way of doing things that encourages high-quality work, emphasizes the value of others, and respects individuals and the community while remaining highly competitive. The other main value is something FIRST calls “coopertition,” which is a philosophy that teams can and should cooperate with one another even as they compete.Mastering those skills and concepts alone would make for a great learning experience. However, that is not enough in the FIRST Robotics Competitions. Teams also need to choose a project to collaborate on. Based on this year’s competition theme “Animal Allies,” The Holographic Cats chose to bring attention to the over-population of cats. They worked with the Wenatchee Valley Humane Society to learn more about the problem and brainstorm solutions. The team contacted local radio stations, then wrote and recorded a public service announcement encouraging cat adoption and foster care.“It’s amazing to see how diligent these kids have been,” Rutherford said. “We are here simply as mentors, as advisors. All of the work, from designing the robot to writing the public service announcement, was done completely by the students.”The work isn’t finished quite yet. “We're looking at having small group meetings to work on specific tasks, such as mission strategy, practice on the competition table and project work,” team mentor Lara Hays said. “We want to use the judges’ suggestions to sharpen our presentation of our great solution.”Rutherford said they will also use the next five weeks to work on team dynamics and core value exercises through fun activities like the human knot and team tower building. “We also need to have the team think about team costumes, maybe cats, and have the project team create them. We have sewing machines and fabric in MAKERSPACE Wenatchee that they can use. And Bob's wife Nancy has gladly offered to help the team learn to sew!” After all, robotics competitions should be fun.# # #

Filed under
Community
Enrich
Explore
Back to Blog