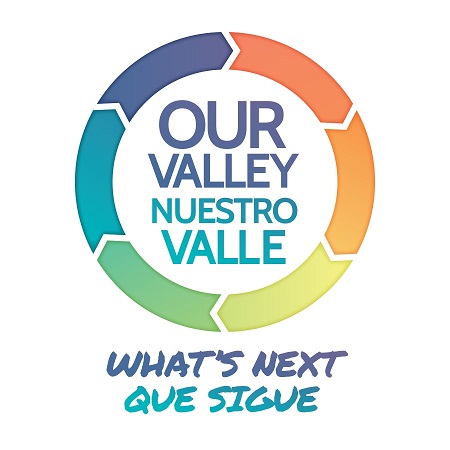 Contact: Alan Walker, (509) 929-1083 or alan@uwcdc.orgApril 27, 2016Our Valley What’s Next came close but ultimately was not chosen one of eight finalists in the America’s Best Communities (ABC) competition today in Durham, N.C.Our Valley did receive a consolation prize of $25,000, however.“While we did not make the finalist round in the ABC contest, Our Valley What's Next will continue to develop thanks in no small part to the $50,000 our community partners have given to date, as well as the $25,000 we received today,” said Alan Walker, an Our Valley core team member and executive director of the United Way of Chelan and Douglas Counties. “These partners recognize the value of Our Valley What's Next and how important it is to the future viability of our communities.”Chosen as finalists were Chisago Lakes, Minn.; Valley County, Idaho; Statesboro, Ga.; Lake Havasu City, Ariz.; Madison, Ind.; Darrington-Arlington, Wa.; Huntington, W.V.; and Tualatin, Ore.ABC recognizes communities across the United States that are developing solutions to transform themselves. The competition is sponsored by Frontier Communications, DISH Network, CoBank, and The Weather Channel. The eight finalists each received a$100,000 grant, which will be used to begin executing their community revitalization strategies.Our Valley What’s Next presented its revitalization plan before ABC judges earlier in the day. Our Valley presenter Shiloh Schauer, the Wenatchee Valley Chamber of Commerce executive director, spoke of how the community is facing tough challenges— poverty, high housing costs, wildfires — that are structural in nature.The key to solving those issues, she said, is greater collaboration between jurisdictions and cultures.Schauer told the judges that Our Valley What’s Next is the first time the Wenatchee and East Wenatchee areas have planned as a region and the first time there has been significant outreach to the Latino community, which makes up about 30 percent of the overall population.“If we don’t come together, we’ll fail to create the pathways our citizens need for prosperity,” Schauer said.She said the goal is to create a backbone organization for Our Valley What’s Next, with support from both the private and public sectors, to drive home the strategies, action items and big projects the group has developed in recent months from community outreach.In talking with residents, Schauer said she has discovered there is an urgency to act now, in part because people see this as an opportune time to shape the community for years to come.“We have to be one community with one vision,” she said.Besides Schauer and Walker, others representing the community in Durham, N.C., were Allison Williams, executive services director for the City of Wenatchee; Lori Barnett, community development director for the City of East Wenatchee; and Lisa Parks, executive director of the Port of Douglas County.Community leaders have pledged that Our Valley What’s Next will continue regardless of how it fared in the ABC competition. Our Valley is in the middle of Phase II of its community planning initiative. Since late February, six teams made up of about 100 residents have been meeting to vet and develop action items and big projects that address the local economy, education, health care, public safety, arts and culture, diversity, land use, transportation and the environment.These projects are serving as the underpinnings of Our Valley’s community revitalization plan and will be “owned” by local governments, the business community, nonprofits and community organizations.OVWN traces its beginning to discussions held by a local economic development roundtable in early 2014, followed by a TEDx conference in Wenatchee that focused on multi-jurisdictional planning and action. The effort — which is overseen by a steering committee made up of business, nonprofit and government leaders — is the first time a planning initiative has been undertaken across multiple jurisdictional boundaries in the area.###