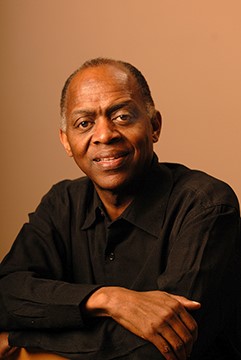 Anthony Brown will present a music documentary of Paul Robeson’s life in his words and songs for the WVC 75th anniversary winter-quarter lecture series, “I Go On Singing.” The performance takes place Thursday, Jan. 15, at 6 p.m. in The Grove Recital Hall, Music and Art Center. During the reception at 5 p.m., attendees are invited to enjoy appetizers, tour the MAC Gallery exhibit, and enjoy new artwork throughout the building from the Washington State Arts Commission (ArtsWA) Art in Public Places Program.The lecture series is free and open to the public. Seating is limited and registration is required. Go to EventBrite, to reserve a seat, or call anniversary coordinator Jennifer Korfiatis at 509.682.6907 to reserve space for groups of six or more.In this 90-minute presentation, which includes piano accompaniment, narration and archival video, Brown describes Robeson’s role in American history and as a champion for peace and human rights during the 20th century. The presentation uses many first-hand accounts from Robeson’s autobiography, Here I Stand. Pete Seeger, a musical colleague of Robeson’s, discusses their friendship, music and turbulent times that they lived in during the video portion of the presentation.Robeson was born in 1898 in Princeton, New Jersey. At 17, he earned a scholarship to Rutgers University, where he received honors in debate and oratory skills, excelled in varsity sports and became class valedictorian. He went on to Columbia University’s Law School, where he married fellow student and journalist Eslanda Goode, and then worked briefly in law before moving on to a career in acting. Robeson moved his family to Europe, where he established a stage, singing and film career.Robeson spoke out frequently against racial injustice in a variety of ways, which included anti-Nazi demonstrations and performances for Allied forces during World War II. He continued his stage work in the United States, but during the Cold War era he was labeled a communist and barred from renewing his passport and from performing in the states. He published his autobiography, Here I Stand, in 1958 and was again permitted to travel internationally. Robeson’s family returned to the U.S. in 1963. He died from a stroke in 1976.Brown is an American baritone singer who promotes peace and reconciliation through his music. His work has taken him to Africa, South America, Europe and Asia. He is also the director of the Peacing It Together Foundation.“As I now travel the world singing and speaking out for peace and justice, I am reminded that Paul Robeson paved the way for me,” Brown states on his website, I Go On Singing.This event is part of WVC’s 75th anniversary celebration. For more anniversary events and information, visit www.wvc.edu/75.# # #Wenatchee Valley College enriches North Central Washington by serving educational and cultural needs of communities and residents throughout the service area. The college provides high-quality transfer, liberal arts, professional/technical, basic skills and continuing education for students of diverse ethnic and economic backgrounds. Visit our website, www.wvc.edu.

Filed under
Business
Enrich
Back to Blog