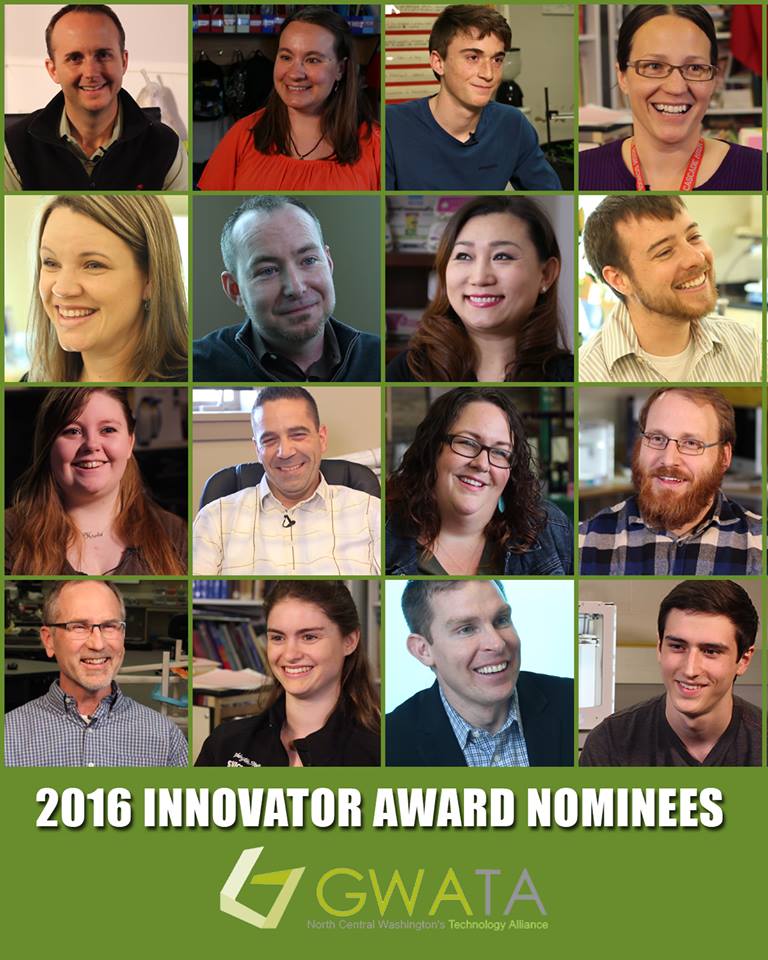 WENATCHEE, WA – GWATA, the NCW Technology Alliance hosted the 16th Annual Innovator Awards on March 29th. During the Innovator Awards Luncheon, GWATA presented several awards showcasing entrepreneurship, innovation, and education.Peoples Bank presented the Entrepreneur of the Year Award to Tumbleweed Shop and Studio. Tumbleweed started as a designer and maker of jewelry aimed at middle market consumers. They started out of their house selling online and now have an e-commerce business in addition to two retail stores, one in Wenatchee and one in Leavenworth. With a jewelry as their base product- Tyler and Jessica Russell have been innovative in their marketing and distribution with a high risk product that is readily available in the marketplace. One of the many reasons Tumbleweed was selected as Entrepreneur of the Year is because they have been so effective in their innovation and craft, that they now nurture other starting entrepreneurs in how to attain this type of success with out of the box thinking. Several businesses who started as consignment vendors at Tumbleweed now own their own local storefronts.Jeffers, Danielson, Sonn & Aylward, PS (JDSA Law) presented the Award for Tech Savvy Business of the year to Stemilt Growers. Stemilt produces apples, pears, cherries and summer fruits. This massive fruit business would not be able to handle the shear volume at the speed necessary to maintain quality and competitive pricing without utilizing technology. As one of the first fruit companies to put money behind research and development Stemilt has taken their operations into the 21st century while still being a family business valuing people and service. Stemilt was selected as Tech Savvy Business of the Year because their use of technology has enabled them to be a world wide leader in fruit production and grow their business globally.GWATA presented the award for Innovative Use of Technology in the Classroom to Brian Herling a teacher at Westside High School. Brian bought his first 3D Printer for his classroom with his own money and quickly inspired his students. Later, he applied for a grant and was awarded a new 3D printer that has changed the game in his classroom in terms of what they are able to design and produce in the classroom. A quadruple amputee recently met with Mr. Herling and his team and they have begun to use the 3D printer to design and make a prosthetic hand with fingers for this man.The Apple STEM Network presented the Future Technology Leader awards to Theo Marshall of Wenatchee High School and Kyle Beattie of Wenatchee Valley College.Theo Marshall has lead several projects - he’s lead a team to build the schools first Underwater Remotely Operated Vehicle, an “OPENRov” kit. His Junior year, Theo helped to build WHS’s build its First Quad Copter from scratch, building and programming the software for it. Theo’s most recent project has been to create an adaptive device for a Wenatchee High School special needs student who has the job of replacing charged batteries into an electronic kiosk at a local restaurant. She was having difficulty inserting the battery so Theo took on the challenge to come up with an adaptive device.Kyle Beattie has been working in the biological sciences lab at Wenatchee Valley College. He is working on an independent research project investigating DNA repair mechanisms in an algae model organism this research has required him to be creative about designing and executing experiments and analyzing the data to inform his next steps. Kyle is also a Veteran and is using his military training to save lives every day as an EMT.GWATA is proud to recognize the 2016 Innovator Award Winners and all of the great nominees. To learn more about the 2016 Innovator Award Winners – watch the videos produced by NCW Life on the GWATA website or Facebook page.GWATA is a regional organization founded in 2000 to promote a vibrant technology-based economy benefiting the citizens and communities of North Central Washington. GWATA’s mission is to bring people and technology resources together, facilitate tech education, support entrepreneurs, and act a conduit between industry and education.