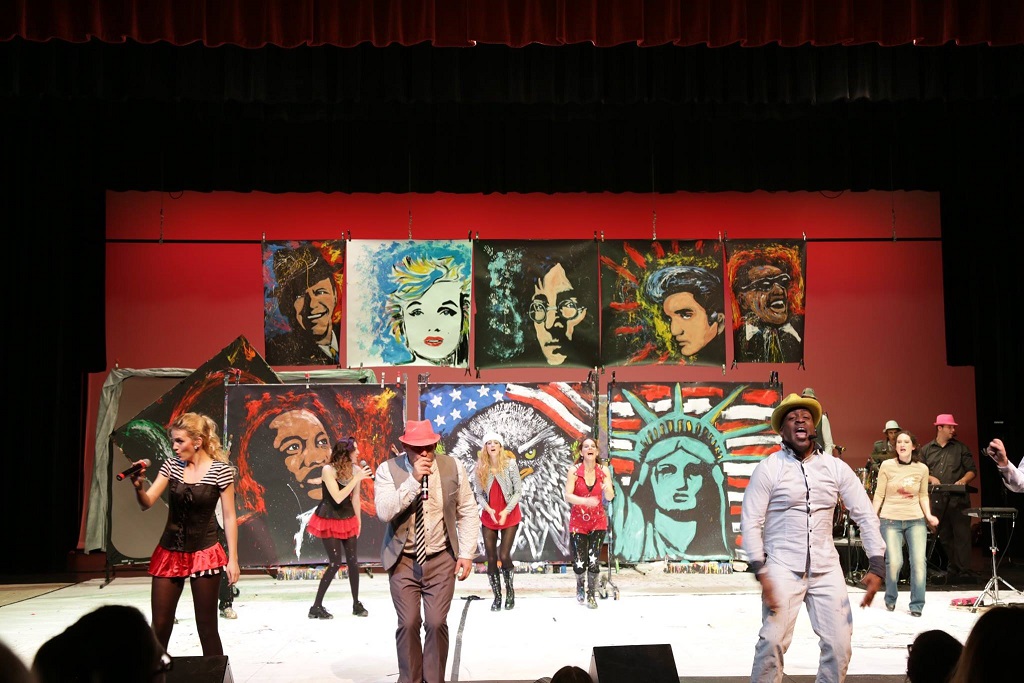 January 16, 2017- Wenatchee, WA: Art, music, theatre, puppetry, singing, dancing, and comedy in a one-of-a-kind, world traveling show - ARTRAGEOUS is coming to the Numerica Performing Arts Center February 8. Artrageous pays tribute to a variety of art forms, pop icons, and musical genres culminating in a gallery of fabulous finished paintings, sponsored by Van Doren Sales.A long time ago (1980’s) in a land far away (Vancouver, Canada) a “troupe of misfits” decided they wanted to see the world together. Together they formed “All and Everything Theater”, a non-profit Children’s Theater which focused on children’s entertainment, street theater, and life-size bunraku puppetry. When their building burnt to the ground, they took to the streets as The Pink Flamingos to perform for the likes of Sir Richard Branson, Steve Forbes, General Colin Powell, and in venues all over the world from India to Thailand and Paris to Wenatchee.As people who live and breathe the arts, creativity, community, and inspiration, they decided to go back to their roots and share their passion with the world as Artrageous – a show that focuses on all the things they believe in and got them to this place. Founding members Daniel Moyer and Deborah Noble now perform with over 20 different artists - many of who have at least 20 years of experience with Artrageous.Imagine witnessing the creativity of an artist creating a masterpiece before your eyes in mere moments. Combined with captivating vocals, intricate choreography, and exciting music, Artrageous takes you on a visual journey and a high energy ride of inspiration, creativity, and engagement supported by LittleSoapShoppe.com and media sponsor NCW Media.Tickets to Artrageous are $25-$29 with discounts for seniors ($21-$25) and youth ($19-$23) and increased prices on showday. For tickets and information, call 509-663-ARTS, go to www.numericapac.org, or visit the Box Office at the Stanley Civic Center, 123 N Wenatchee Avenue.The Numerica Performing Arts Center at the Stanley Civic Center is a non-profit organization and naming partner with Numerica Credit Union.

Filed under
Enrich
Explore
Back to Blog