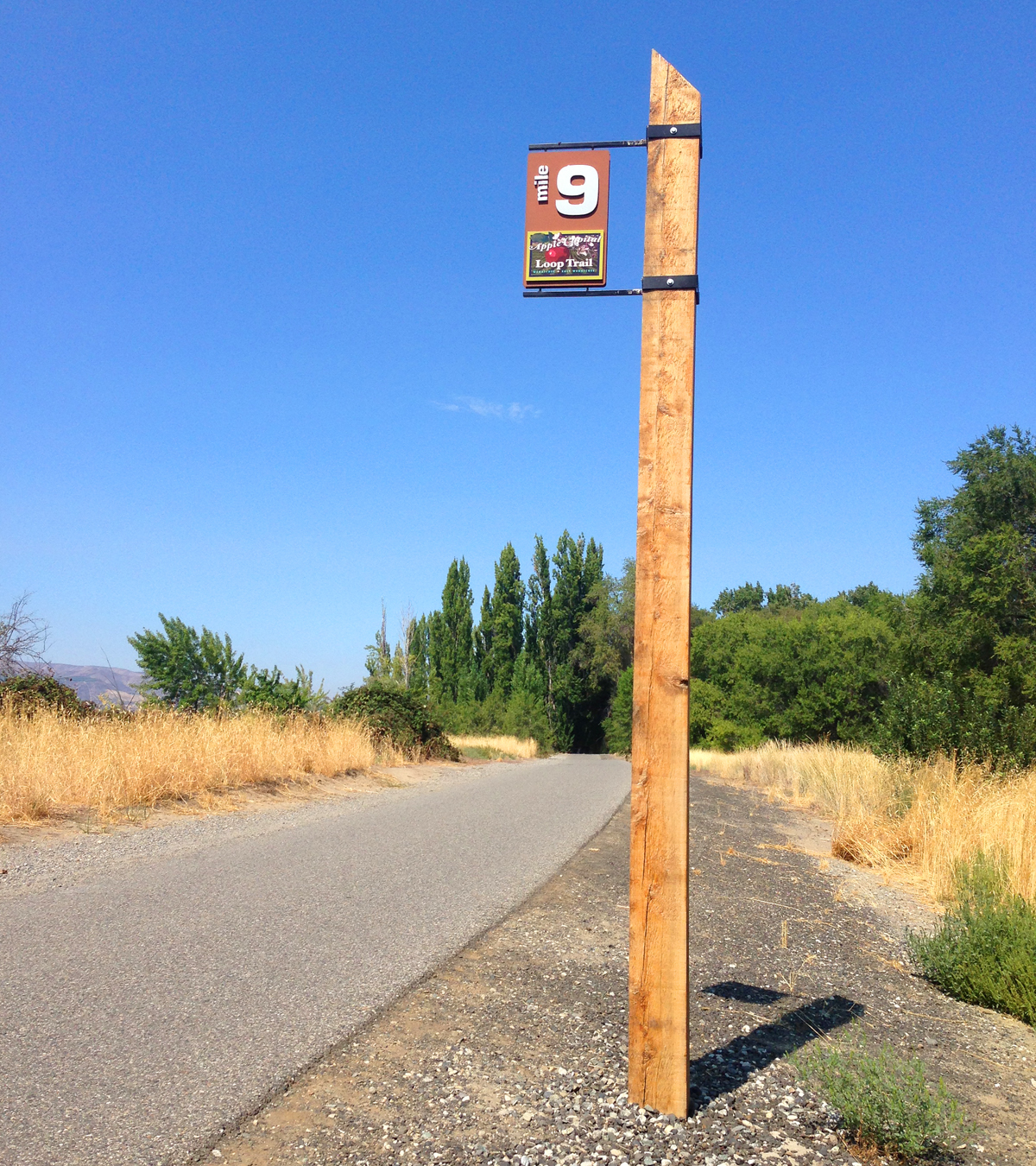 RunWenatchee announced today it has raised $19,935 for the project and has ordered the eight mile-markers from Graybeal Signs in Wenatchee. The funds came from private, public and nonprofit sources.The markers are expected to be installed by late June.“The need for a complete network of mile markers on the Loop Trail has existed for awhile, and we are happy to have played a role in seeing this project to completion,” said Steve Maher of RunWenatchee. “Right now, emergency responders are sometimes confused about locations along the trail when they receive a 911 call from there. The markers will help trail visitors determine their location and distances. Plus, these things look sharp and will create a positive brand for the Loop Trail as a whole.”The wood posts are 13 feet high — with 9 feet above the ground — and are set off with a decorative powder coated steel and aluminum sign on top that notes the mile. The design was created by Heather Ostenson of Wenatchee and is meant to brand the trail.The markers are built to withstand the elements and to deter vandalism. The latter is one of the reasons why the metal signs are 9 feet above the ground.The first two mile-markers — one in East Wenatchee about a mile north of the Columbia River Pedestrian Bridge and the other in the middle of the bridge — were installed three years ago, using federal pedestrian safety funds. After that the project stalled due to lack of funds.Maher said RunWenatchee received technical and marketing assistance from SCJ Alliance, Douglas County, North 40 Productions and AdventureWenatchee in raising the money and getting the necessary permits for the markers.“RunWenatchee got involved both because we saw the need and because we use the trail eachThursday night for our club runs,” Maher said. “Rivercom has been part of the planning processall along and believes the mile-marker network will improve response times to incidents on theLoop Trail.”Of the $19,935 raised, $5,840 came from 38 individual donors as part of a crowdsourcing campaign overseen by RunWenatchee last fall and early winter. Other funding sources:

Maher said all the donors, including individuals, will have their names engraved on a recognition plaque along the Loop Trail.“We received money from all quarters — individuals, the private sector, nonprofits and public agencies,” Maher said. “It shows the depth to which the Loop Trail is treasured in our community.”###Contact: Steve Maher, RunWenatchee, (509) 630-2090 or info@runwenatchee.com

Filed under
Explore
Back to Blog