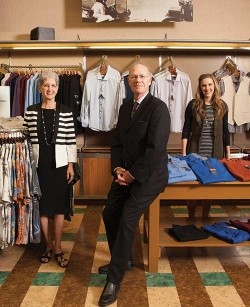 Mills Bros. Inc.WenatcheeHelping to dress the men of Wenatchee since 1906, Mills Bros. this year added the fourth generation of the Mills family to its heritage roster. Meredith Hilger, the daughter of third-generation owners Sam and Vickie Mills, returned to Wenatchee after working in corporate retail in Seattle.“I’m glad to be back home in a small, independently owned business,” Hilger says. “We are proud to be a third and fourth generation working together toward the success of this company. We try to make sure that all employed at Mills Bros. have a voice, and we are careful not to exclude anyone from the decision-making process. Some employees have been with us over 20 years and truly do feel like members of the family.”That family goes back to brothers Sam and Harvey Mills, who left their jobs at a railroad-owned department store in Roslyn to begin their own menswear business in Wenatchee in September of 1906, when Theodore Roosevelt was president.Eighteen presidents and 109 years later, Mills Bros. continues to offer in-house tailoring and the sort of personal-touch customer service that Sam and Harvey Mills introduced. Mills Bros. uses careful buying, an eye for quality, and smart inventory control to stay current with men’s fashion trends and continue growing the company. The result: Mills Bros’ sales are up and its wedding business in particular is thriving. Merchandise ranges from formal wear to sportswear and shoes, both for dress and casual occasions.Sam Mills, grandson of the cofounder, says the foundation laid by the preceding generations was a solid one. “They taught me a lot about business, to have good-quality merchandise and, most important, to strive to give people the best customer service,” Mills says, “because we depend on repeat business.”Hilger adds that the company’s community ties run deep, including perennial sponsorship of local sports teams and support of charity fundraisers. “My father introduces me to just about everyone when we’re out and about,” she says. “We’re proud to be part of the community.”